Fitted a home made snorkel to Si's SJ

So, after much staring and rubbing of chins, we decided to crack on and fit the snorkel thingy we thought would work on the SJ. 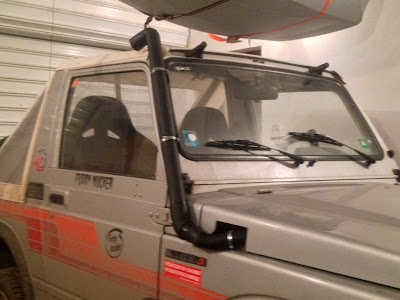 The bits used were;
1 x length of 2.2 inch of UPVC drain pipe stuff
1 x 90 degree bend
1 x 45 degree bend
1 x 18 inch, (or so) bendy hose thing
3 Jubilee clips3 90° metal brackets
Some screw thingies that may or may not be designed for metal
Some small nuts and bolts
Can of underbody protection spray, (black)
Tube of silicone sealant
Electrical tape
Cups of coffee
Also some beer
And a bit of swiss roll

So we started by figuring out using the MKI eyeball where the snorkel was to be positioned on the frame. After agreeing, we smacked some punch marks in the metal, and set about drilling. The brackets were screwed in, and the tube lined up, and hey presto, it was where it was supposed to be. Good start.

Next, the 45 degree bend was inserted, and again using the MkI eyeball, we figured out where the hole in the bonnet was going to be. Si decided to go through the bonnet via the little vent slot thingies in the side, so out came the hacksaw, and off that came. After shaping it a touch, and smoothing it down so the bonnet could be opened and closed without interfering with the hose... It was all good. 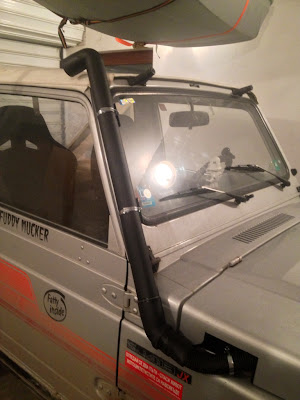 Next came the jubilee clip to hold the bit of hose that went through the newly gaping hole. A hole was drilled in both jubilee clip and the wing, and much swearing, managed to get the bugger tightened up, (we removed a bit of the inner metalwork that wasn't required to make access easier. 2 whacks with a grinder, and a whack with the hammer, and we were good to go.

So, the hose was lined up, going through the bonnet without catching on anything, (we re-trimmed the edges of the hole here so it was all where it should be). Next was the innards and connecting the hose to the intake on the inside. 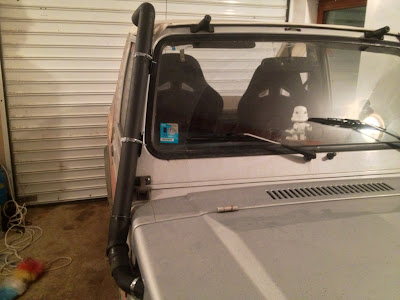 The connection on the hose, and the tube on the intake were pretty much a snug fit, so a touch of silicone, and some electrical tape later, it was hooked up, and seemingly working. The little plastic airbox was sealed, and it seemed to work without anything exploding, bursting into flames, or falling apart. The plastic box may be replaced sooner rather than later, as it seems to seep air, so a better solution will have to be found.

So, it all fits, hooks up, so it all came apart again, and after some light sanding, the whole tube got a liberal dousing in under-body protection spray to give it a rubberised appearance. a 90 degree bend was added to the top with some mesh inside to keep rain, leaves, mice, owls, and wildebeests out.

Looks quite good, I reckon. The Vit will be done next week.